The delegation received information on UNAFEI activities and Crime Congress to be held at Kyoto in 2020 from Mr. Keisuke SENTA, Director of UNAFEI, and on ACPF activities from Mr. Hiroyuki YOSHIDA, Director of the Programme Management Bureau of the ACPF.

Based on the booklet “JAPAN, how safe” presented by the ACPF, MCPF members asked some critical questions such as:

At the end of their visit, MCPF and ACPF members took group photos for the commemoration of their visit in front of the entrance of the UNAFEI building with the United Nations Flag and the National Flag of Japan. 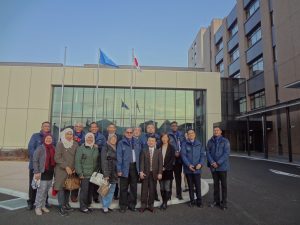 The delegation also made a courtesy call to the Superintendent General of the Metropolitan Police Department, and then visited SECOM to experience its security system during their stay in Japan.

The MCPF is an overseas cooperative organization established in 1993. The ACPF and MCPF have long relationships since the third ACPF World Conference in Malaysia in 1993 in which Prime Minister of Malaysia, Dato’ Seri Dr. Mahatir bin Mohamad delivered Congratulatory Address. The ACPF and MCPF shared their activities and exchanged opinions for possible cooperation in the future.