The 27th Session of the UN Commission on Crime Prevention and Criminal Justice (CCPCJ) was held from 14 to 18 May, 2018.

The commission is annually held as an intergovernmental conference and discusses on agendas and administration of UN Crime Congress which is to be held once in every five years.

（Commission Programme of Events in English）

The ACPF attended the Commission in capacity of a UN NGO. UNAFEI and the ACPF jointly conducted Shikita Memorial Event on 16 May.

During the Event, many speakers delivered their appreciation to Mr. Shikita, former Chairperson of the CACPF, for his contributions to the UN, and their expectation to the ACPF activities in the future. 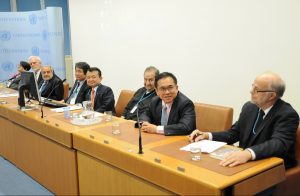 → took an active role in the UN Criminal Justice field for many years (Refer to No. 60 ACPF Magazine)

Shikita Memorial Service was first conducted at the Lawyers Club, Tokyo, on 30 November 2017.

The ACPF received many condolence mails from Vienna and around the world. UNAFEI and the ACPF held Shikita memorial event to express our appreciation to Mr. Shikita for his international contributions.

The Shikita Memorial Event was carried on Mainichi Daily News on 18 May with a title “Memorial Service in Vienna for Mr. Shikita who contributed to enhancement of internationalization in the legal profession” .

Those who are related to Mr. Shikita attended the event.

Ms. Jolanta Redo, Permanent Representative of the ACPF /for Europe and Central Asia to the UN Office at Vienna（→Ms. Redo’s memorial speech）