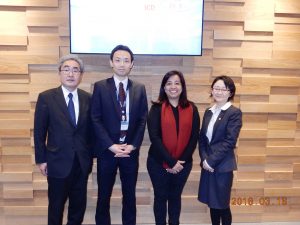 The CPPAP is a renamed organization of the ACPPI (Asia Crime Prevention Philippines Incorporated), which was established in 1994 by UNAFEI alumni. (The ACPPI was sometimes mistaken as another organization which abbreviation was also ACPPI)

The CPPAP and the ACPF have cooperative relationships for more than 20 years.

→The ACPPI and ACPF Nagoya Branch inaugurated friendship agreement in 1994.

→The CPPAP has been managing for more than 20 years the Phil-Japan Halfway House (PJHH) which was constructed in 1997 through joint cooperation of the Philippine side (CPPAP, NAPOLCOM, DOJ, Correction Bureau, Parole and Probation Administration and others) and the Japan side (Nagoya West Lions Club, ACPF Nagoya Branch, ACPF Headquarters).

→The signing ceremony of the MOA on the administration of the PJHH was conducted with the attendance of 40 Philippine members in Tokyo in September, 2017.

Ms. Caparas participated in the 112th UNAFEI international training course in 1999. During her stay in Tokyo this March, she visited ACPF Headquarters., UNAFEI and the Ministry of Justice

While her visit to UNAFEI in Akishima, she revealed her impression that New UNAFEI is big (because International Cooperation Department is also in the building.) and modernized (International Conference Halls, Wi-Fi). She also inspected the library (50,000books) and Philippine corner shelf, where she took a voluminous Handbook of the Criminal Procedure, and found on the opposite page of the cover letters “donation 30 June 1999 Ms. Caparas”! What a coincidence. She and others were surprised with joy and took pictures with the book. 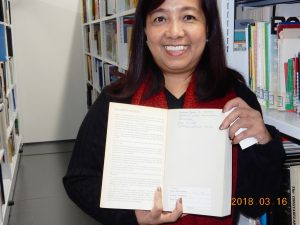 She joined the welcome party hosted by Mr. Yamashita, Secretary General, ACPF and exchanged opinions on ACPF activities in the evening.